CCV’s story began fifty years ago, among a small group of visionaries with the radical idea that everyone, regardless of background or circumstance, should have the opportunity to go to college.

2020 marks 50 years of CCV, Vermont’s only community college, which started out as a bold experiment to shake up the status quo: Rather than asking rural Vermont to come to a college campus, CCV would bring college to rural Vermont. Rather than expecting Vermonters to go into debt to achieve a college degree, CCV would make higher education affordable. Rather than demanding that students fit their families and jobs around college classes, CCV would make it easy to fit college classes around families and jobs. This belief in access—and that everyone is entitled to it—is at the foundation of what has become the second-largest college in the state.

CCV celebrated its anniversary at the Vermont State House on Wednesday, where lawmakers joined students and alumni, staff and faculty, former CCV presidents, education leaders, and community members for a reception and the reading of a Senate Concurrent Resolution to honor the College’s milestone. Guests gathered in the Cedar Creek Room for birthday cake and remarks from Governor Phil Scott, CCV President Joyce Judy, Senator and CCV faculty member Ginny Lyons, and Representative and CCV alumnus Dylan Giambatista.

Giambatista grew up in Rutland County and came to CCV in 2005 after having dropped out of high school. “What I found at the Community College of Vermont is what so many others have found: It’s not just a school—it is a family. It is a family with people at all levels looking out for one another…if you’re a student at CCV, if you’ve been a faculty at CCV, you know the value that when life happens, and you’re left in a tough situation, this institution is here for you.”

A number of current students came to Wednesday’s celebration from CCV centers in Brattleboro, the Upper Valley, Montpelier, Morrisville, and Winooski. Students were given a tour of the State House and had a chance to meet with Senate President Pro Tem Tim Ashe and House Speaker Mitzi Johnson.

Jenna Gilblair, a CCV-Morrisville student who plans to graduate with a degree in behavioral science this spring, was excited about the chance to visit the capitol. “I like how they can bring us in and let us celebrate our school here,” she said. Gilblair was joined by classmate Stacy Jones, a first-generation student who says she chose CCV because it’s affordable. “I’m forty-seven years old. I’m tired of paycheck to paycheck, and I want more for our life.” Jones is on her way to a degree in early childhood education.

In her remarks, President Judy acknowledged CCV’s humble beginnings and emphasized the College’s many successes. “One lesson we have learned that has made all the difference in how we do our work: a community college must take its name seriously and work together with the broader community to bring our shared resources to the table.” From four-year colleges to businesses, and from high schools and technical centers to the Department of Labor and the Vermont Student Assistance Corporation (VSAC), CCV is cultivating community partnerships throughout Vermont. “Working together, we strive to meet the changing needs of Vermonters so the credentials and degrees we provide lead students directly to good jobs, self-sufficiency, and financial security,” said Judy. “Our collaboration works because we all share a core belief that education has the power to transform lives, inspire individuals and families, and strengthen our businesses and communities.”

Many of the guests at Wednesday’s celebration—including Governor Scott—wore stickers that read “Ask me about my CCV story.” Part of Scott’s CCV story is that he never misses a CCV graduation. “I’m always so impressed with those Vermonters of all ages…who have worked so hard to get a college education while also balancing work, family, and life in general,” he said. “I’ve seen grandmothers surrounded by their grandchildren, finally taking the time for themselves after spending a lifetime taking care of others. I’ve also seen seventeen-year-olds with their proud parents and grandparents watching as they take an early step toward their career. And I’ve seen those middle-aged Vermonters setting an example for their kids, having the courage to take that risk and make a change to do better for themselves and their families. They’re all truly inspiring.”

Giambatista also noted the diverse backgrounds of his CCV classmates, from students who’d just returned from war to New Americans just starting out in Vermont. “As we celebrate this 50th anniversary, let’s recognize that we’re not just conferring degrees on students. We are changing lives.”

CCV’s story began 50 years ago, among a small group of visionaries with a radical idea. This week—and throughout 2020—we’re celebrating the impact of that idea. President Judy concluded Wednesday’s reception with a mention of the “Ask me” stickers, encouraging guests to enjoy a few minutes of conversation with one another. “The CCV story is really made up of the individual stories of the tens of thousands of Vermonters who have come through our doors.”

Check out the full slideshow from CCV Day at the State House. Photos by Jade Premont.

Check out the full slideshow from CCV Day at the State House. Photos by Jade Premont. 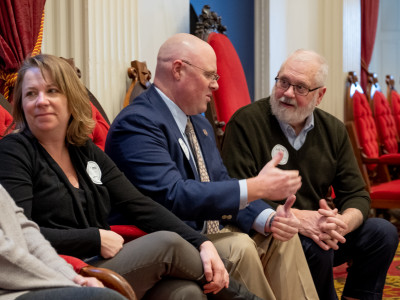 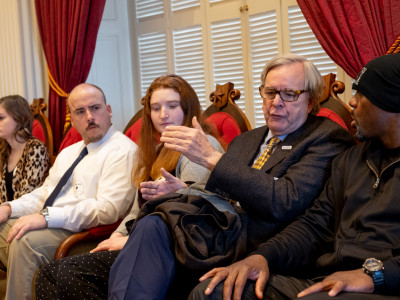 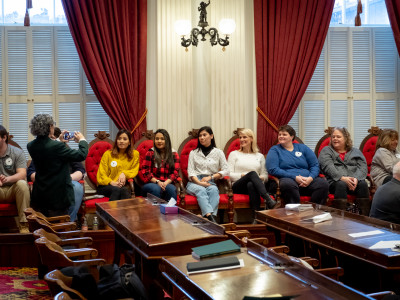 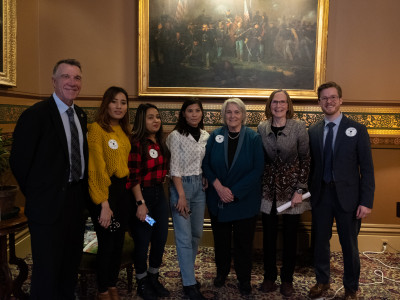 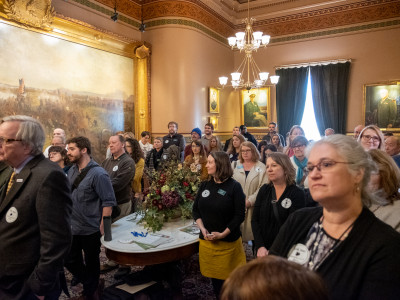 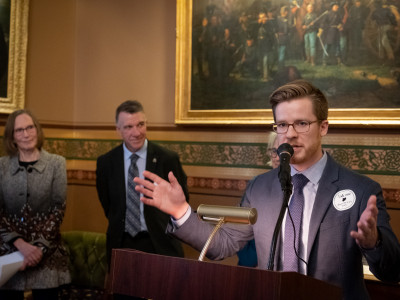 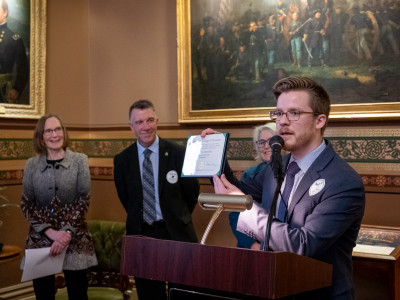 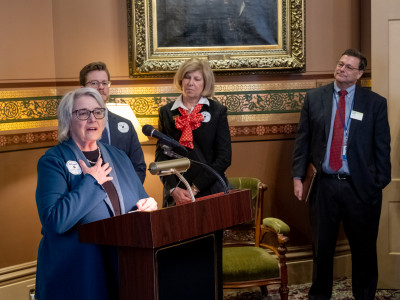 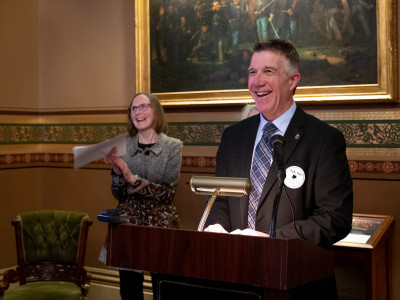 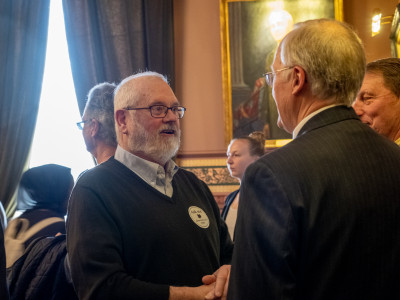 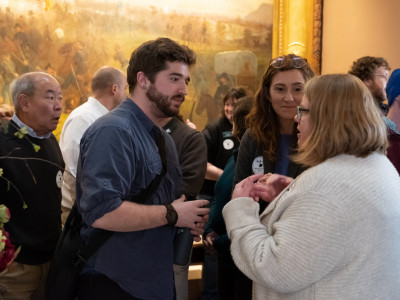 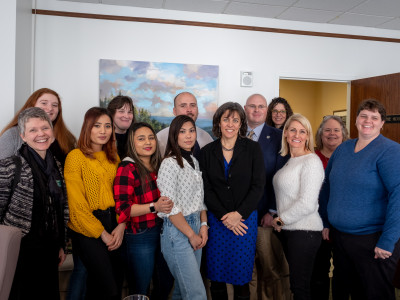 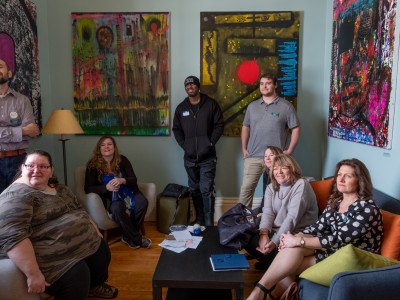 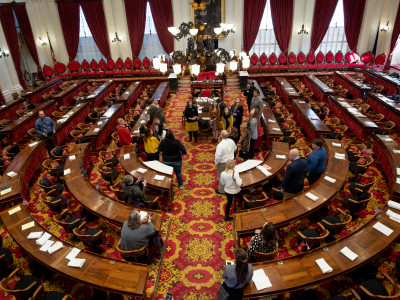 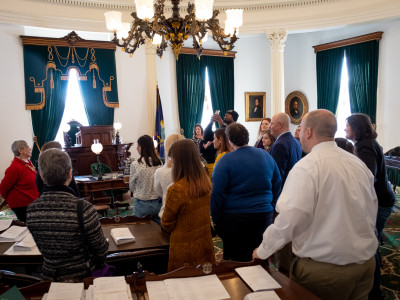 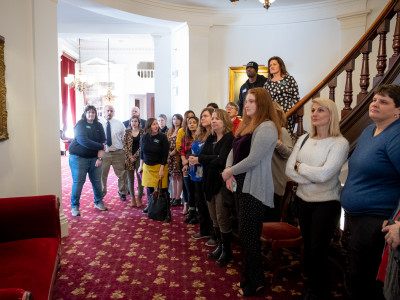 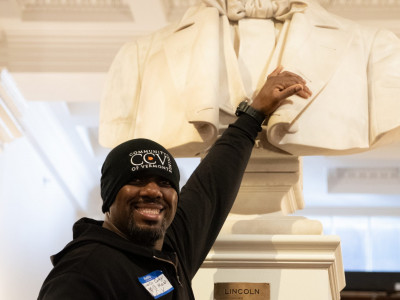 To learn more about CCV’s history, our impact on Vermont, and 50th anniversary events throughout 2020, visit 50.ccv.edu.

We’re on the countdown to the most important day of the year at CCV: commencement! We’ll celebrate the Class of 2018 on Saturday, June 2 at Norwich University. We congratulate all of our grads and wish them the best in their future endeavors! Happy reading, and don't forget to share your own news at marketing@ccv.edu!
Read More

Community College of Vermont is pleased to announce that the following students have been named to the President’s, Dean’s, and Student Honors Lists for the fall 2018 semester.
Read More